To extend or not to extend? (Thursday poll) 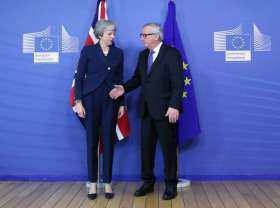 Well, this week we read the not entirely unexpected news that we have wasted the two year and seven month period between voting and supposed to be leaving without managing a deal, and we were lways told that that meant we would leave without a deal. As usual it seems we were told lies and they now seem, both the UK leadership (horse laugh) and the EU, intent on extending the Article 50 period, which seems that the impossible is possible after all.

In a short time we will in fact know whether there is going to be an extension or not, but Theresa May is really leaving it till the last minute, two weeks before the final deadline, to ask for the extension.

The EU is then placed in a position of power, and will call the shots of whether they accept this or not, apparently all the states must agree and already one gerontophilic gnome who is the unpopular dictator of one of the less meaningful of the European countries has said his country (which incidentally we went to war to defend on two occasions) will veto the extension of we don’t have a plan.

Of course Macron won’t see it that way. He will think he is saving the British from themselves, and many British may well agree with him.

He will think he is doing the UK a “grande service de reconnaissance” for our co-operation with France putting blood on the ground against Nazi Germany.  He will be thinking that he can leverage a second referendum in which the British people will decide that they do love the federalist vision after all, and “come back and stay for good this time”, as political commentator Paul Young puts it. Oh that we might indeed vote to stay, but to stay and fight the globalists and federalists, aligning ourselves with the Eurosceptic governments which include the Eastern side and Greece, Italy, Denmark, increasingly Holland. We will see after the next round of Euro-elections just how far the discontent has spread and in fact we are still only at the begiining of the resistance.

Corbyn has already been forced to say he will supposrt a second referendum, although how this makes him less Anti-Semitic is beyond me. Now May, who has discounted the Second Referendum all along, can pull the excuse that “Macron made me do it”.

Today’s poll won’t be open for long as it is a prediction poll and there won’t be any sense in it once we know the results, so please hurry up and vote and share this. The idea is to try to predict if there will be an extension, how long, and if there will be the condition of the UK having a second referendum.

There are so many variables that it is impossible to catch all, please just vote for which of the scenarios you think most likely. Not what you want to happen.