Bleak Midwinter in Finland (with apologies to Christina Rossetti)

First published as part of the Daily Telegraph‘s February 2008 Creative Writing Competition. It was one of the six shortlisted out of about 40 entries. As ever I did not get the first prize, but it attracted a lot of positive responses. The reason for the “lizard and gizzard”  was down to the set words you had to include in the piece for the month, which was a continual feature of the contest. This time “lizard” was one of the words. Or possibly “blizzard”. I can’t even remember which ones the other set words were!

The picture which accompanied it is one of my stills from the visit with the image of Christina Rossetti, the authoress of the original Bleak Midwinter Poem, superimposed. 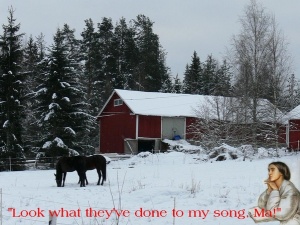 "With apologies to Christina Rosetti..."

2.
I booked a week in Finland
For a conference
By Helsinki airport
But it made no sense.
And the food was awful
(Why did no-one say
That all Finnish cooking
Tasted bad that way?)

3.
So I took a hire car
Drove to Liperi;
Several hundred miles of
Road so slippery.
In this bleak midwinter
Why did no-one say
All I’d have to tour by
Was four hours light a day?

4.
Went to Kerimaki
But the biggest church
Made of wood in all the world
Left me in the lurch
Why did no one tell me
No-one would be there?
Not even a notice-board
To show that people care.

5.
Went to Savonlinna;
Castle hard to find.
When I got there it was closed,
Like the Finnish mind.
Had a cup of coffee
By some frozen lake;
Cost me seven Euros
Just to stay awake.

6.
Tried to eat some supper
After six o clock;
All the Finns were snug at home,
Shops and restaurants shut.
Only alcoholics,
In insentient bliss,
Worshipping their beverages
With imbibing kiss.

7.
Third day without sunlight,
I got so depressed
I could scarce be bothered
To get up and dressed
Stopped a while in Joensuu
But Joe and Sue weren’t there.
That sounded the deathknell
To this long-night-mare.

8.
I thought that I might see some lakes
Scenery so nice
But they might as well be fields
All covered in ice
In a sudden blizzard
I saw between the trees
A crow disgorge a lizard from its gizzard
When it tried to sneeze.

9.
Finland, Finland, Finland
The place I don’t want to be.
I’d sooner go to Belgium,
Or just watch TV.
Maybe in the summer
The “oh!” goes back in “Suomi”
But in the bleak mid winter
I won’t go if you sue me.

10.
How can I finnish
This here Finish tryst?
If I were a novelist
I would add a twist.
If I were a playwright
The last scene would be fun;
But as it is I’m finishing
With the “Finnish week/weak finish” pun.

Posted on 30/09/2010, in Autobiographical, Blog only, Culinary, Finland, My posts on other fora/blogs, Poems by me, Poetry and Songs, Satire and Comedy, Telegraph Creative Writing Competition Entries and tagged Christina Rossetti, Finland, Helsinki, In the Bleak Midwinter, My poems, Savonlinna. Bookmark the permalink. 3 Comments.