To Polish people and others who use the term “Ms Amy”, “Mr David”, etc in English

Just for your information, a title plus the first name is decidedly old-fashioned in English now. We use it for people with very high titles, such as Sir Cliff (Richards), Dame Edna (Everage) but not Lord and Lady. Mr, Miss and Mrs were used only with surname already before Ms was revived in the 20th Century. Ms plus first name is recorded in the seventeeth century. Ms then went out of use for two centuries, (because it is actually short for “mistress” which took on a risqué meaning).

The use of any title less than Sir or Dame plus first name seems decidedly quaint now. One is put in mind of that traditional old Texas oil baron Jock Ewing, who persisted in calling his wife “Miss Ellie” even after they were married and even just before his funeral. I understand that this is a bit of a Texas thing. 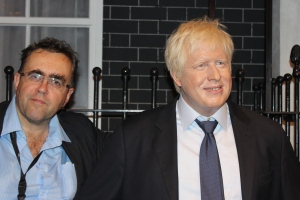 Meeting his Dick(Whittington)ness Mr Boris Johnson, at least, a plasticine avatar of the same.

In the English-speaking world, first names seem to be in general use now and in the main people do not even ask for permission to switch to it. However there are still situations where deference is called for, such as to a client or a teacher, in which case Mr/Miss/Mrs/Ms or a professional/academic title like Dr or Professor are used with the surname. More highly honorific titles still, such as Excellency for embassadors, highness or majesty for royalty are not usually combined with names at all in direct address. It is also usually appropriate to use the term once in a meeting and then default to “sir, ma’am” after this. The use of first or second name after foreign titles used in English will follow the usage in the language of origin. Examples include Don Giovanni, Sheikh Yamani, Mufti Menk and Imam Bayildi.

Posted in Blog only, Savoir vivre and Etiquette